So what is meant by these soil obstacles ? What are being considered are the information encoded into a plant's DNA Library which become triggered by sensors when a plant's taproot first emerges at the germination stage easily growing through the softer upper layers of the soil, suddenly and unexpectedly encountering a barrier to previous unhindered gravitropism growth goals. The upper layers of soil generally softer and rich in organic matter allow a seedling root system easy access to towards it's downwards goal, but when encountering such areas or regions deep down below the surface such as clay or fractured bedrock, a different file or program is accessed within it's DNA to change the drill bit mechanism so to speak. Unlike human drilling technologies where a drill must be removed from the well hole and the bit changed to a much tougher cutting bit, the plant's genetic instructions can kick in to allow a morphological change in  structure while continuing it's downwards goal without much interruption. To explain how plant's respond to these growth obstacles  they encounter, these researchers developed a model  system consisting of a 3-Dlayered hydrogel.  The hydrogel has  two layers: a stiff lower layer representing subsoil obstacles  and a compliant upper layer representing softer surface soil media. The red line denotes the interface between  both softer and stiff gels. The plant utilized in the  experiment is Barrel Clover (Medicago truncatula) which is commonly used by many researchers as a model  organism for legume biology. Notice the buckling & twisting structural changes just before the stiffer layer is encounter and begins it's continual deeper penetration through the barriers.

In the case of Desert plants as an example, how do they have the ability to meet such obstacles head on and reach it's ultimate goal of finally reaching deeper subsoil levels where moisture is constantly available and dependable ? It creates a spiraling pattern or shape to it's root structure which acts much like a Helical spiraled Auger used in post hole drilling or water well drilling, except in this case this springlike spiraled design gives the root cap more power and push through these layer searching for weak points within the clay layers or fractured bedrock. To the left is a beautiful illustration of a plant used as a cover crop and a deep soil organic matter and water penetration enhancer. It's called the Tillage Radish and it's amazing ability to penetrate deeper than most other types of cover crops allows for better soil percolation as a result of it's ability to drill itself into subsoil below surface layers. Now for the latest article on yesterday titled:

The research, published in this week's online Early Edition of Proceedings of the National Academy of Sciences, could eventually assist in breeding crop plants optimized for growth in areas where climate change or over farming has led to difficult soil conditions

The researchers grew Medicago truncatula plants in a transparent gel consisting of two layers – a soft, top layer and a stiff, lower layer. The roots grew straight down until reaching the lower layer, where they began to twist and buckle into spring-like shapes, much like a string begins to curl if it's continuously twisted in one direction.Combining 3-D movies with measurements and mathematical modeling, the research sheds new light on root growth revealing the role mechanics plays in determining the root shapes. Ultimately, this led to a previously unknown connection between root geometry, growth, and force generation.

"When the roots hit the stiff barrier, growth causes them to buckle like a wire or rod that's been compressed. But by twisting, the buckled roots become helical, allowing the root to push off more gel and get more force at the tip," said Jesse Silverberg, a Cornell graduate student in the Department of Physics and lead researcher for the study."Suppose the plant is growing along and finds itself stuck at a layer of clay or tough clump of soil. The root needs an extra force to push through these barriers, and the mathematical model tells us how large of a helix the root needs to grow to do just that. Roughly, the stiffer the barrier, the larger the helix," said Silverberg.The researchers also used the 3-D technology to discover that 74 percent of the plant roots twisted in a counter-clockwise manner. Silverberg says further research may reveal similar behavior in other plant species." 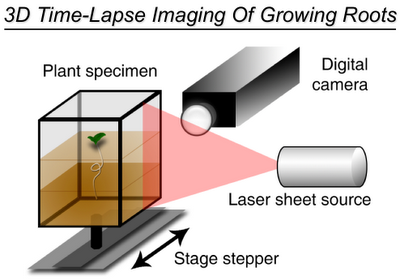 Using this automated system, they were able to directly observe obstructed  root growth and the formation of the buckled spiraling taproot morphology.


To sum up, their results showed that Barrel Clover (Medicago truncatula), when confronted with barriers, twist & spiral during growth to produce a "Biological Spring". This morphology takes advantage of general mechanical principles enabling them to push off their environment and generate larger forces at their root tips. This ultimately allows the plants greater access to water moisture and nutrients as they continue to penetrate far deeper into the Earth's subsoil environments. While the above info is interesting in all of a plant's root components and the sophisticated mechanisms for creating a more powerful drill bit when encountering a much harder material substrate deep within the Earth, please always have in mind & remember your ultimate goal when planning and strategically placing any shrubs or trees into a habitat restoration project, urban landscape layout or your simple home gardening plans. Your goal is to biomimic and replicate an intelligently designed engineered system no matter what your beliefs are as to their origins. These processes are far superior to anything Humans have devised and re-establishing previously perfect biological weather modification mechanisms where they once occurred. Keep in mind that these were unfortunately removed as a result of the disrespect and destruction by irresponsible human activities which continue to plague our planet to the present day. Remember that most of these types of research findings mentioned above while extremely informative and interesting generally get shelved away in some library in favour of quick fix solutions which do nothing but allow any large Corporate entity a quick profit innovation which is what has screwed up our Natural World in the first place.

The above animated illustration should be your goal. Remember that deeper rooted tree species within every type of ecosystem on our planet have been found to emit the highest concentration of negative ions and Volatile Organic compounds (VOCs which are numerous gaseous aerosols) into the atmosphere which aid in cloud formation and rainfall. These things have for the most part been destroyed by humans often with the imperfect governmental sanctions and blessings. The above info or any other info on this site is NOT going to change our world for the better. But it is hoped that individuals reading will be benefited by having the wheels of their own intelligent thinking processes activated and in the light of such knowledge make their own personal projects a success, even if on a small scale. What you do with this is up to you only.

As time moves forward, a process we know as desertification is radically changing the Earth's landscape and soil structure. Vegetation (doesn't matter what ecotype) is removed, rains wash away organic enriched topsoil and a more sterile condition becomes the norm. This subsoil is further dried by the direct effects of the Sun's light and a sort of fossilization of sorts is established where water from rainfall will not penetrate but only a few inches. Without the processes of a tree's hydrological ability at Hydraulic Descent(pumping water into deeper layers) and Hydraulic Lift & Redistribution which not only facilitate upwards water movement and distribution to entire ecosystems, but also tap through it's deep conductivity connection into Earth's electrical magnetism for recharging the atmosphere. Failure to recognize any of these processes has to be reversed if life will continue on this planet. No amount of imperfect artificial weather modification apparatus will replace the more perfect natural hydrological mechanical processes which may well have been around for millions of years.

Much Future Successes. Please relate any personal achievements in the comments below.
-