The Dictionary Definition:"A type of mycorrhizae composed of a fungus sheath around the outside of root tips, with individual hyphae penetrating between the cortical cells of the root to absorb photosynthates."

In simple terms, this is the type of mycorrhizal fungus you can physically see with your own eyes and also the fruitingbodies (which most folks call mushrooms/truffles) that appear on or in the ground and quite often can be edible. Association of this fungus may be host specific to certain types of trees. For example the PT Mycorrhizae (The Dog Turd Fungus) often referenced here colonizes oaks, pines, firs, birch, willows, eucalyptus, cottonwoods, even Pecan trees. However it won't associate with such trees as maples, sycamores and such. These are trees with endomycorrhizal colonization which will be dealt with on a separate page.

These fungi associations are able to find and release nutrients in minerals that are unavailable to the plants on their own. Much like our own digestive system internally has beneficial bacteria for breaking down our food we eat into various sugars so that our bodies can absorb them and feed nutritionally. Without these associations we'd starve. Other creatures like Termites also have a Protozoa contained in their digestive tracts which digests the wood they chew up and swallow. Without these they'd starve on eating wood. These fungi also provide a source of antibiotics to the plants roots from potentially harmful pathogens to the roots. As mentioned before, researchers are also finding out that various plant species can be connected through this fungal network and actually exchange various photosynthates or carbons produced by these plants and may even exchange various chemical compounds to other completely different plants as a sort of chemical exchange agreement for which many plants derive health benefits from living in association with such neighbours. We call this community plantings and should be copied and replicated in any urban landscape, gardening or Habitat restoration project. All of this of course is fascilitated thru the grid network. The forest is actually far more sophisticated than most people realize. Most science based chemical systems created by big business actually destroys this system, hence the ill effects of various ecosystems around our globe. Trust me, not all scientists are on the same page despite what many defenders may think.

Next, let's illustrate just how these symbiotic relationships come about by means of a hardware viewpoint. We've already touched on many mycorrhizae are host specific. This means they will only form connections with certain plants, shrubs or trees. Like the Internet Networks around the globe with it's data bases, wiring & cabling connections, millions of computers with all their internal hardware and various software applications controlling all of this communications by sending and receive specific messages, the grid system between fungi and plants operate similarily.  Plants manufacture specific acids which will attract a specific host which has the right fit. This can almost be compare to differing male and female adapters used by different countries around the globe for electrical connections. Here's a visual look at different fittings, but consider that out in the natural world the endless array of fittings and receptors are far more numerous and complex than the things achieved and created by humans. 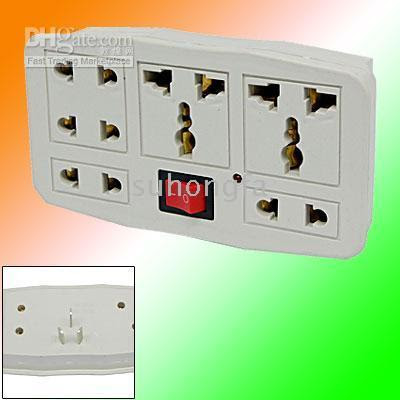 The image above is common around the internet, but I original found it through Plant Health Care Inc and Dr Donald Marx their chief scientist who worked for the US Forest Service and studied Pisolithus tinctorius. Take special note of the main pine seedling roots which consist of two lateral roots and one main taproot. The addition of ectomycorrhizal fungi increases water and nutrient uptake by anywhere from 200% to 800% depending on the environment. In turn the plant feeds the fungi carbon in the form of sugars. Both organisms (plants & fungus) and the 100s of thousands of species already have encoded in their DNA the correct coupling fittings which will work best in their environments. While their are numerous Biotech companies today around the globe who produce any number of microbial species arrangements in their branded magical mixes packaged and marketed as the primo answer to their gardening and landscaping needs, they ultimately are of a general purpose nature and no doubt many of them work. Some better than others. But ultimately there is a wealth of information to be explored, uncovered, revealed and explained by inquisitive humans seeking better answers and correct understanding. Given the nature of imperfect humans for promoting and marketing, it behooves the average end user to educate themselves by reading, researching through experimention and practical applications for the benefit of themselves and others they share such info with. Remember that our planet's present decline is a direct result of not only the greed and selfishness of corporate marketing and control, but also the ignorance of the average end user. So educate yourself and others all the while enjoying a richer life in the process..

Some Resources for your deeper education.

Fair Trade in the Underworld: the Ectomycorrhizal Symbiosis

"The ectomycorrhizal fungi have a beneficial impact on plant growth and nutrient cycling in forest ecosystems. The differentiation of an effective symbiosis induces a series of complex and overlapping morphogenetic processes in the colonizing mycorrhizal hyphae and lateral roots of host trees. Up- and down-regulation of gene expression is a major mechanism for controlling ectomycorrhizal symbiosis development and functioning. Transcript profiling studies led to the identification of genes that are required for fungal attachment, plant defense, and symbiosis-related metabolism. They showed that changes in morphology associated with mycorrhizal development were accompanied by alteration in transcript patterns. Comparison of the genomes of the different pathogenic and saprobic fungi with the ectomycorrhizal Laccaria bicolor genome revealed that the symbiont genome encodes several features found in saprotrophic and biotrophic fungi, but it lacks the extensive set of cell wall hydrolytic enzymes encoded by soil white-rot fungi and necrotrophic phytopathogens. Genome-wide studies are providing crucial insights into the genetic makeup of mycorrhizal interactions"

Biology of the Fungal Cell

Consider a visual illustrative picture of just how the Ectomycorrhizal Fungi attaches themselves to an Oak or Pine tree's feeder root system. Rather than infecting the inside of the cells as some Endomycorrhizal Fungi do as per the illustration above, ectomycorrhizas form around the cells as can be illustrated by a brickwall. Consider the square shaped bricks as representing the cells and the mortar as the ectomycorhizal growing in between the root cells as opposed to infecting them from within as the endomycorrhizal fungi does. As per the illustration at the top of this page, ectomycorrhizal fungi are fond of Oaks, Pines, Firs, Pecans, Eucalyptus, Willows, members of Populus family (cottonwoods, etc). There are also a number of important large tropical trees which are also ectomycorrhizal trees. Here is a list and photo gallery below of such trees.

"Greasewood or Chamise ( Adenostoma fasciculatum ) normally forms arbuscular mycorrhizae with all genera found in the region. However, during wet years (El Niño), we found EM associated with its roots and EM fungi in the stands (Allen and others 1999b). There was a high diversity of fungi ranging from Cenococcum and Balsamia spp. (ascomycetes ) to a variety of basidiomycetes such as Pisolithus species."

When Mycorrhizae debunks the Scientific Orthodoxy on what & who they'll colonize

Consider the chaparral shrub above here called Chamise or Greasewood (Adenostoma fasiculatum). Now, this is a Chaparral Shrub whiich by nature is specific a host for endomycorrhizal fungi, yet under certain environmental climate conditions where there is a few year period with heavier than normal rainfall, which would also include a heavier than normal summer monsoonal period, something within this shrub's DNA causes an epigenetic switch within a specific gene to be turned on which allows an unusual opposite chemical messaging to be released through it's root exudates which signals ectomycorrhizal spores to germinate and colonize the rootsystem of this shrub. Now take a close relative to Chamise below.

Now let's consider this chaparral shrub above here called Redshank or Ribbonwood (Adenostoma sparsifolium) which is a relative of the Chamise mentioned previously. This example of Redshank is across from my Burnt Valley Road property in Anza, California which I no longer own. My property had both of these Adenostoma shrubs. I've never seen truffles of Pisolithus tinctorius ectomycorrhiza which were colonized on Chamise, but I have seen giant ones for on Redshank after I inoculated 6" high pine and oak seedlings in between the Redshank which possesses an amazing ability as a nurse plant for both pines and oaks. This spot was always the rural school bus stop for kids every day of the week on Table Mountain. Stll, it's an amazing example of how nature is far more complex and adaptable than scientists are aware and constantly shakes the foundations of previously held cherished paradigms. Although not on the list of P.T. Mycorrhizal fungi favourites, I have personally gotten colonization on Arizona's Alligator Juniper and Cuyamaca Cypress which like Adenostoma are said to be strictly endomycorrhizal according to the literature.

Now let's consider different environments like Boreal Forest ecosystems of Canada, Siberia and northern Europe's Scandinavia. Both the Amanita gemmata and the Mario Brothers video energy mushroom, Amanita muscaria seen below can be found in these parts of the world. It's fascinating how exactly these fungi work for the oaks, pines, (Björk) birch & Aspen, but I wrote a little something about how they mine the soils for elements which are normally unavailable to most plants in the form of locked up minerals.

Mycorrhizal Fungi run the Largest Mining Operation in the World

I'll add to the list as time goes on