Before all Habitat Restoration Projects, Landscaping Projects or even your own Home Gardening Projects, there is a little something to take away from the building of Swales, BioSwales, Mounds, Berms, Windbreaks,  which themselves can be found in many areas of nature. So what exactly are these terms/Solutions and what is their purpose and function in the Landscape or environment ?


"a low-lying or depressed and often wet stretch of land; also : a shallow depression on a golf fairway or green"

"A Swale is a low tract of land, especially one that is moist or marshy.

The term can refer to a natural landscape feature or a human-created one. Artificial swales are often designed to manage water runoff, filter pollutants, and increase rainwater infiltration.

The swale concept has also been popularized as a rainwater harvesting and soil conservation strategy by Bill Mollison, Geoff Lawton and other advocates of permaculture. In this context it usually refers to a water harvesting ditch on contour. Another term used is contour bund.

Natural swale Swales as used in permaculture are designed to slow and capture runoff by spreading it horizontally across the landscape (along an elevation contour line), facilitating runoff infiltration into the soil. This type of swale is created by digging a ditch on contour and piling the dirt on the downhill side of the ditch to create a berm. In arid climates, vegetation (existing or planted) along the swale can benefit from the concentration of runoff. The term swale or "beach swale" is also used to describe long, narrow, usually shallow troughs between ridges or sandbars on a beach, that run parallel to the shoreline."

The top photo nere is a Construction Swale and the lower photo is of a Natural Swale. 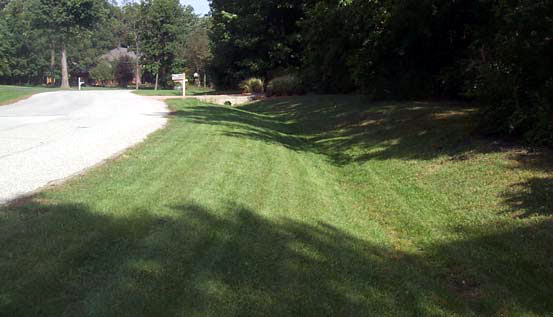 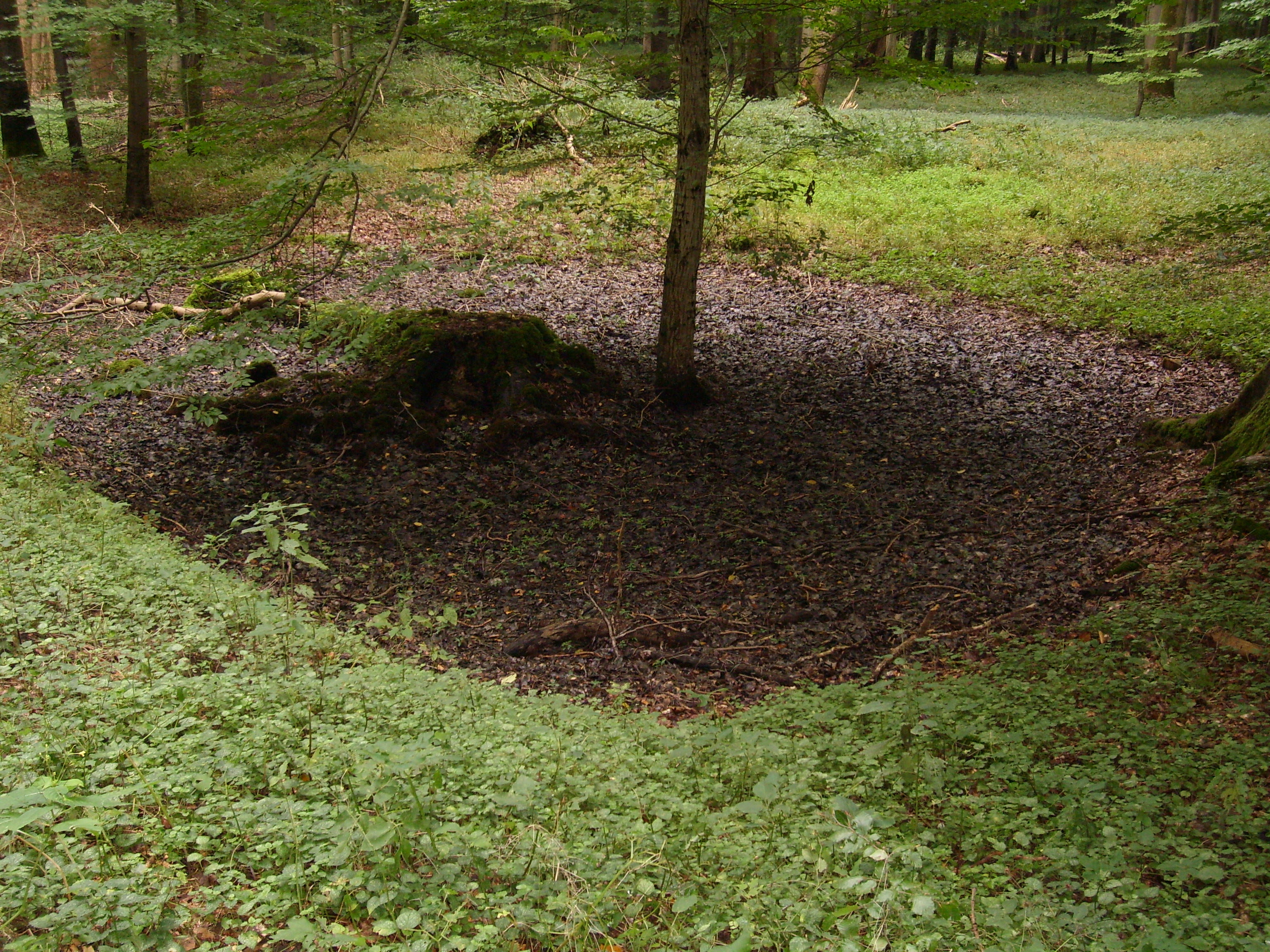 
"Bioswales are landscape elements designed to remove silt and pollution from surface runoff water. They consist of a swaled drainage course with gently sloped sides (less than six percent) and filled with vegetation, compost and/or riprap."

"The water's flow path, along with the wide and shallow ditch, is designed to maximize the time water spends in the swale, which aids the trapping of pollutants and silt. Depending upon the geometry of land available, a bioswale may have a meandering or almost straight channel alignment. Biological factors also contribute to the breakdown of certain pollutants."

"A common application is around parking lots, where substantial automotive pollution is collected by the paving and then flushed by rain. The bioswale, or other type of biofilter, wraps around the parking lot and treats the runoff before releasing it to the watershed or storm sewer."

Description/Purpose:
A berm is a mound of earth with sloping sides that is located between areas of approximately the same elevation. Berms or mounds may serve one or a combination of the following functions: 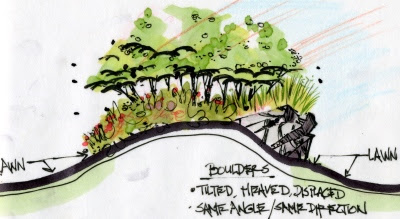 
"Terraces are used in farming to cultivate sloped land. Graduated terrace steps are commonly used to farm on hilly or mountainous terrain. Terraced fields decrease erosion and surface runoff, and are effective for growing crops requiring much water, such as rice. Terraced paddy fields are used widely in rice farming in east, south, and southeast Asia, as well as other places. Drier-climate terrace farming is common throughout the Mediterranean Basin, e.g., in Cadaqués, Catalonia, where they were used for vineyards, olive trees, cork oak, etc., on Mallorca, or in Cinque Terre, Italy. In the Andes, farmers have used terraces known as andenes for over a thousand years to farm potatoes, maize, and other native crops. The Inca also used terraces for soil conservation, along with a system of canals and aqueducts to direct water through dry land and increase fertility[citation needed]. Terracing is also used for gardening on sloping terrain; the Hanging Gardens of Babylon may have been built on an artificial mountain with stepped terraces like those on a ziggurat[citation needed]. At the seaside Villa of the Papyri in Herculaneum, the villa gardens of Julius Caesar's father-in-law fell away to give pleasant and varied views of the Bay of Naples. Terraced fields are common in islands with vigorous slopes. The Canary Islands present a complex system of terraces covering the landscape from the coastal irrigated plantations to the dry fields in the highlands. These terraces, which are named "cadenas" (chains), are built with stone walls of skillful design, which include attached stairs and channels[citation needed]. In old English, a terrace was also called a "lynch" (lynchet) and there is a fine example of a Lynch Mill in Lyme Regis, for which the water arrives via a river ducted along a terrace. This set-up was used in steep hilly areas in the UK"

That certainly is the most common type of terracing that comes to mind as these pictures show.

And the above is the common view or image that comes to mind when we think of terracing. However this has been done by many civilizations from the Past such as Incas Terracing and the early residents of the Canary Islands.

Here is some example of terracing that was done many many years ago in Tenerife even though much is not used today. Perhaps some terracing was used as a strategy to slow rain water down so to better chance at percolating down into the Volcanic soil as water is a precious commodity. 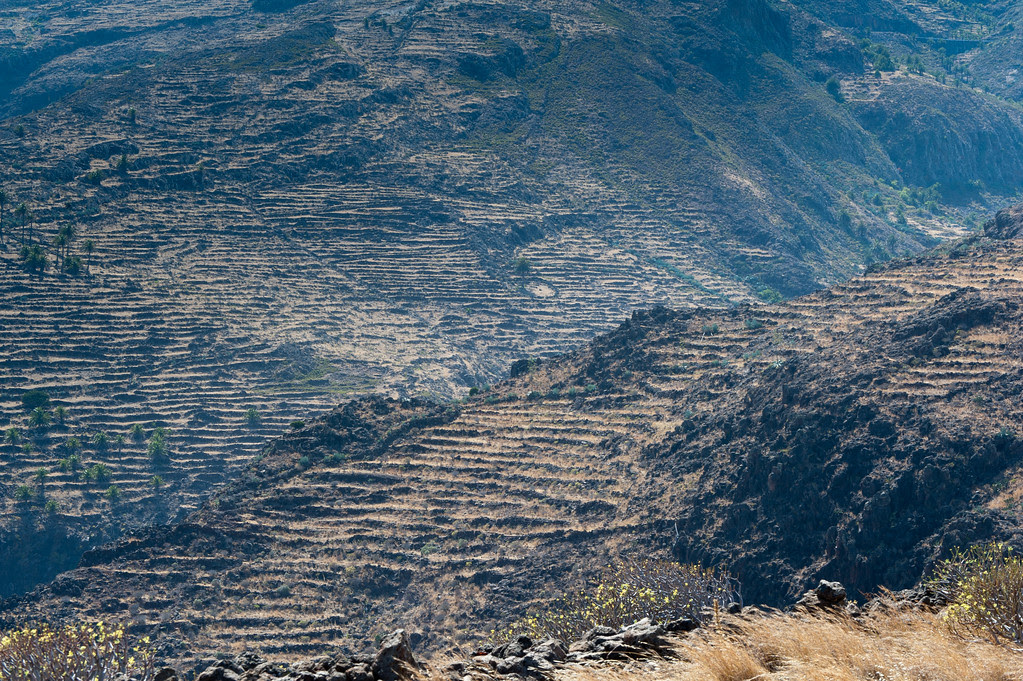 Then there is terracing done in nature by animals as their natural pattern is never to walk or create trails straight up and down as in a vertical motion, but rather horizontal action.

And then of course there are topography map which in reality are a form of terracing illustrated and make for great scale models for restoration of such ruined areas often labeled badlands as seen below. In some cases the natural elements have created these through historical past catastrophic events. In other more modern cases, humans have caused such things by means of ignorance, stupidity, greed and selfishness. 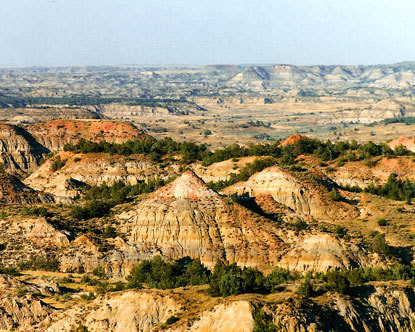 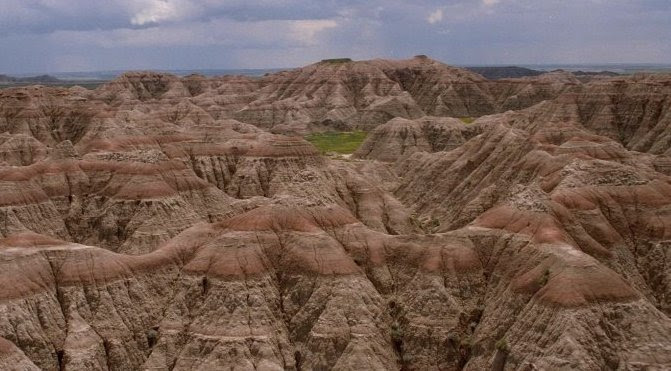 These Badlands are found everywhere throughout the Earth and humans should find ways of making them productive once again even if only for wildlife.


"A windbreak or shelterbelt is a plantation usually made up of one or more rows of trees or shrubs planted in such a manner as to provide shelter from the wind and to protect soil from erosion. They are commonly planted around the edges of fields on farms. If designed properly, windbreaks around a home can reduce the cost of heating and cooling and save energy. Windbreaks are also planted to help keep snow from drifting onto roadways and even yards. Other benefits include providing habitat for wildlife and in some regions the trees are harvested for wood products. A further use for a shelterbelt is to screen a farm from a main road or motorway. This improves the farm landscape by reducing the visual incursion of the motorway, mitigating noise from the traffic and providing a safe barrier between farm animals and the road. A further use for 'windbreaks' is for a retail item used on the beach and camping to prevent wind from disturbing social enjoyment. Americans tend to use the term windbreaker whereas Europeans favour the term 'windbreak'. Normally made from cotton, nylon, canvas and recycled sails, windbreaks tend to have three or more panels, held in place with poles that slide into pockets sewn into the panel. The poles are then hammered into the ground and a windbreak is formed."


Windbreaks have a number of purposes as listed. Agricultural, Wildlife Habitat, Sheltering Homes, Sound Barriers. Humans in their Ignorance and in some cases stupidity have brought in non-native species of plants to accomplish what otherwise superior local resources could have handled. 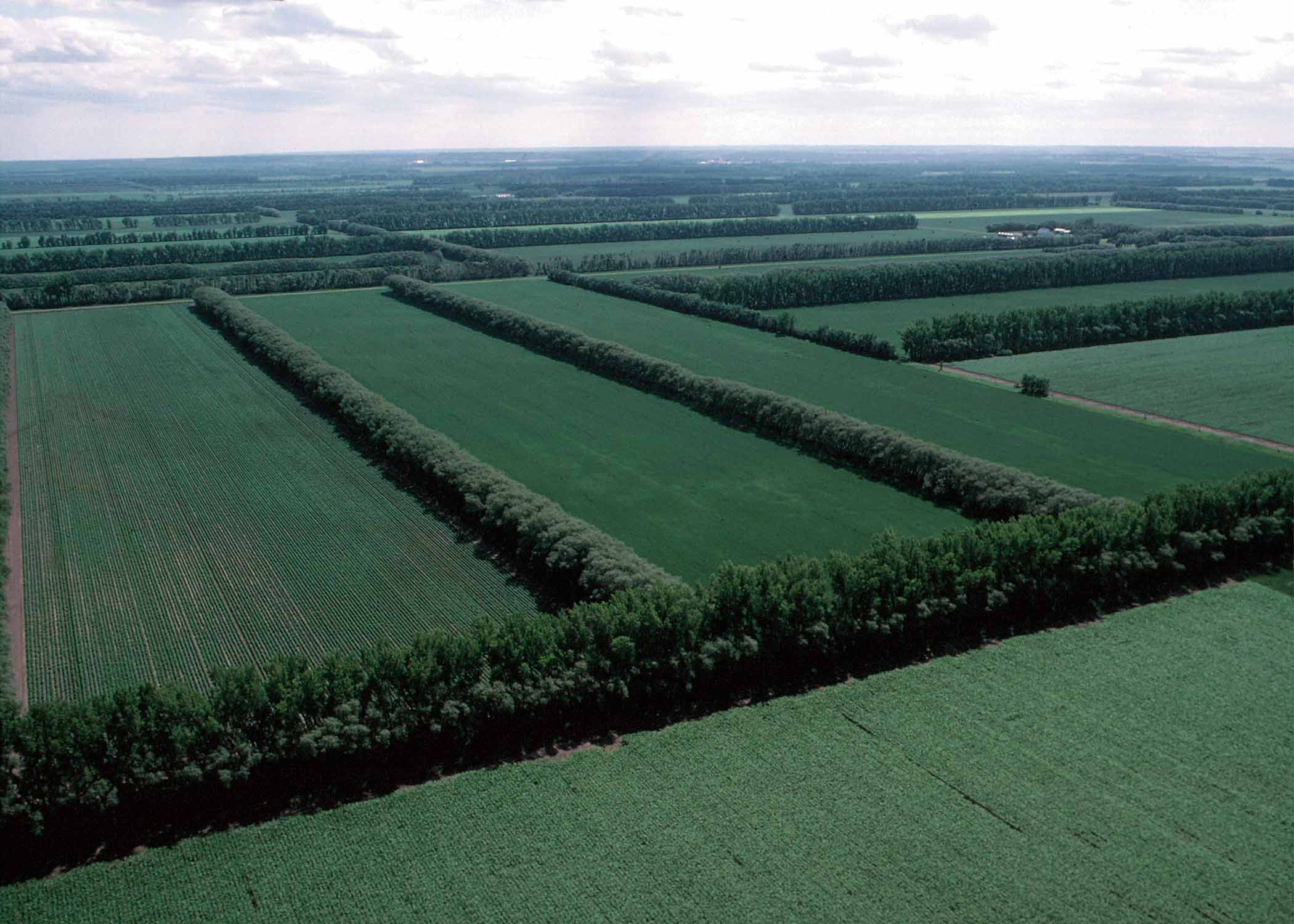 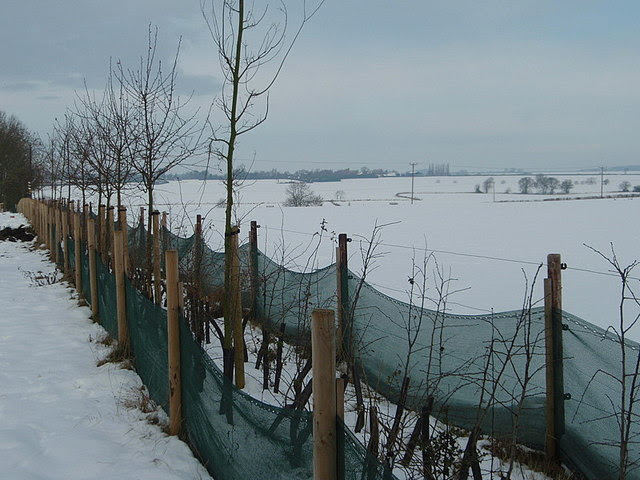 In some cases, good idea windbreaks gone bad for the environment like water loving Tamarisks Trees which have taken control of waterways.

The bottom line with all that humans now know and understand, there is no reason to not put this knowledge to good use. Unfortunately much bias and prejudice for old methods hinders such education.