As promised I'll be regularly updating everything that is going on with this experiment. Please don't hesitate to get your kids involved in such an exciting venture with your own germination project no matter what the seed source. 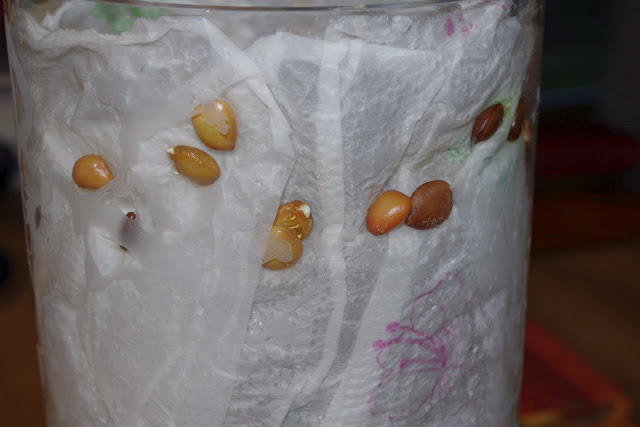 This is an update on seed growth only 5 days after germination. We left on a Wednesday June 27, 2012. The two photos below are of of the germinated seeds of both Poincianna (Mexican Red Bird of Paradise and common southwestern Desert Paloverde Tree, both with similar characteristics and requirements as Mesquite, though Paloverde and Catsclaw are closer. 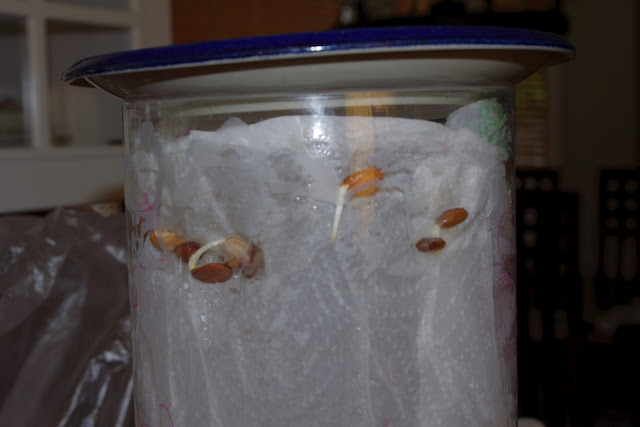 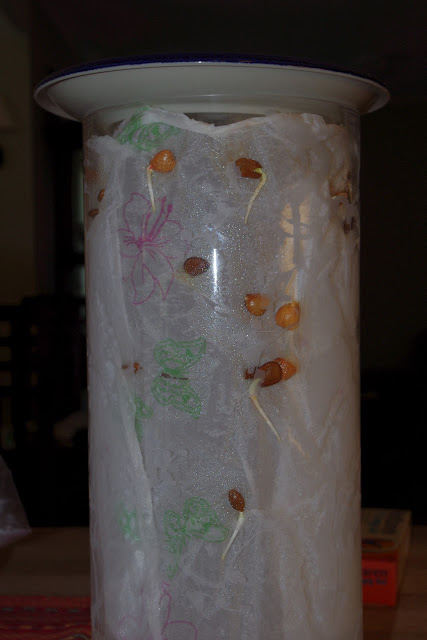 Now here is Sunday night at 9:00pm when we arrived home from Dänemark. Notice the longer taproots and heavier folliage of poincianna as compare to the smaller slender seeds of Paloverde ? 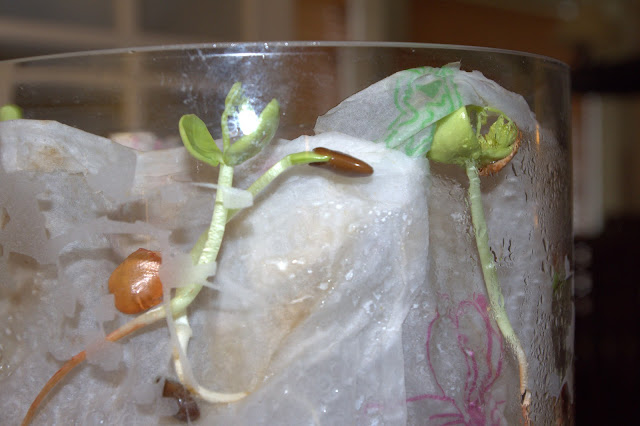 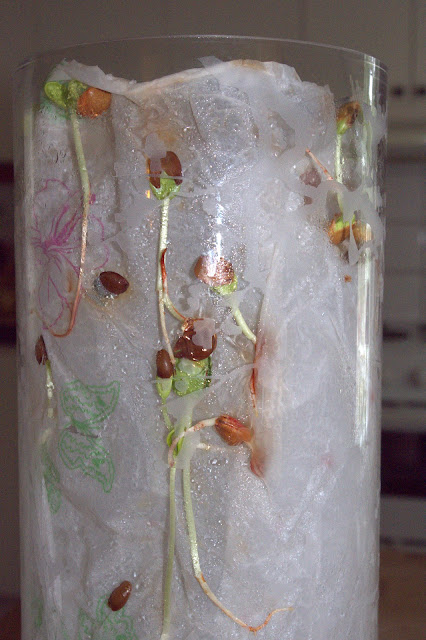 Just a brief comment and illustrative comparison note here. Every single time i have done this experiment, the seed of either the Mesquite, Paloverde, Catsclaw Acacia or any other seed from the pea family desert Plant dwellers has always put all of it's energy into taprooting formation. Never have I seen them develope side lateral roots as depicted in some of the illustrations.

Even in this experiment when limited by the bottom of the container it will simply continue growth of the taproot by spiraling around the edges of the container bottom in the water. It simply won't stop there. Now take another look at the illustration again of the animated illustration of a Mesquite seedling timeline from Texas AgriLife Extension Service. Notice how they attempt to illustrate side lateral roots appearing ? I can't say for sure that out in nature somewhere some may do this, but from what I know and have experience with, they put all energy and resources into main taproot formation.

To be fair I do however like some of the info from this extension service and their assessment of benefits of Mesquite Habitat which has traditional been demonized as a result of Human ignorance. Here's the link:

There are a number of observations that I agree with. Unlike other seeds in the pea family within their ecosystem, they remain in the pod. Other seed from Paloverde and Acacia explode and spit the seeds far away from the parent tree. To test this, simply take a dried pod of one of those plants that has yet to open and attempt to slowly open. It will pop and seeds spit everywhere. Mesquite will stay for years in the pod till some animal forages it and runs it through the digestive tract.

They also make similar illutrations I have made not just with Mesquite, but Paloverde and Catsclaw as well. That is if you stumble upon a Mesquite that looks like a new seedling, it's probably actually 3 or 4 years old. They also make this observation that I have in my germination under glass experiment.

"A substantial proportion of the carbohydrate in the embryo is devoted to root system development"(Mooney et al. 1977)

Sure enough that has always been my observation every single time I have done the above experiment. Even in the late 1970s when I outplanted a Catsclaw Acacia seedling with a meter long taproot with no side lateral roots, it's folliage was no more than the two juvenile leafs with on sprig or stem of small compound leaf common with adults. It stayed under 5 inches in height for 6 years before exploding in growth. The toughest job I had was digging a meter deep hole  up on Rattlesnake Mountain's decomposed Granite to accomodate that taproot without harming it.


In the wild they may well establish all manner of rootsystem, but clearly the DNA instructions inside the plant force it to concentrate the majority of it's energy into deep taproot construction. This should tell the human Nurseryman or Habitat Restorationist something about the container system used for just such a plant with specific unique needs and requirements. More on this later, but the photo below is not necessarily the best solution for outplanting in remote locations. Great for Home Gardeners and Urban Lanscapers who've been trained to manage a system as if it's on constant life support, but not for the wild independent system.