Who would have thought that an often overlooked desert plant as the Prickly Pear Cactus could be utilized in a totally different unique way as never thought possible. Good for those researchers in their on quest for knowledge and improving our ability to use a plant's genetic encoded instincts to work for us instead of a failed technology that fights against Nature itself.


Studies show that Prickly Pear Cactus could be a useful tool  for absorbing unwanted Selenium from soils in California's  San Joaquin Valley. This story is exciting to me if only because of my fondness for southwestern plants and desert regions. The idea that Prickly Pear Cactus could be used as a Bioremediation Tool is interesting and begs questions about other abilities and possibilities. In my own research and experimentation with Cactus Habitat rebuilding I have noticed that in the areas I have planted them in colonies among Coastal Chaparral Scrub is the lack of invasive Weeds (ruderals) which have become a pest in many areas. Personally I've wondered if maybe Cacti have some form of Allelopathic Properties about them in the root systems. Such an ability prevents competing plants from taking hold in the presence of various biochemicals produced by such established plants. I thus far haven't investigated further, but my past pondering over such cacti root biochemical possibilities were again triggered again by today's article from the USDA blog. Here is the full story:


This actually is not the first investigation and story on this. There was a earlier one back in January 2012 this year. Story quote:
"The west side of the San Joaquin Valley in California presents several challenges to growers. Ancient seas that once covered the area left behind marine sediments, shale formations, and deposits of selenium and other minerals. Anything grown there needs to be irrigated, but the resulting runoff, when it contains high levels of selenium, can be toxic to fish, migratory birds, and other wildlife that drink from waterways and drainage ditches. Selenium runoff is subject to monitoring by regional water-quality officials. Periodic droughts and population growth are also squeezing supplies of the fresh water available for irrigation."

“We need to find a way to keep the land productive, but that becomes difficult when you have environmental concerns stemming from soils with these mineral deposits,” says Gary Bañuelos, an Agricultural Research Service plant/soil scientist with the Water Management Research Unit at the San Joaquin Valley Agricultural Sciences Center in Parlier.
Bañuelos believes that he has found a promising alternative: prickly pear cactus (Opuntia ficus-indica),a drought-tolerant plant. Bañuelos’s studies show that certain cacti tolerate salty soil and take up selenium from it. “We’re hoping to produce a new crop on unproductive land and slowly manage the selenium content of the soil in the process of growing it,” Bañuelos says.

Newly emerging Cactus pad or cladode with flower on field grown Prickly Pear Cactus, Opuntia ficus-indica (Indian Fig or Barbary Fig) which is a species of cactus that has long been a domesticated crop plant important to agricultural communities through out arid and semiarid parts of the world. This particular plant is thought to originate from Mexico and brought up to California by the Spanish Missionaries. Take note that is has less spines than most of the southwest natives which makes it easier to farm.


This picture here on the right demonstrates the type of soil problems associated with irrigated land for which the landscape's geologic origin is from ancient seabeds.

"Bañuelos and his colleagues from the University of Palermo, Italy, initially evaluated varieties of Opuntia ficus-indica from the USDA-ARS National Arid Land Genetic Resources Unit at Parlier, which maintains and evaluates plant germplasm adapted to arid conditions. The team’s evaluation focused on the ability of different varieties to tolerate poor-quality soils in greenhouses. Partners in Palermo included Viviana Catanese and Giuseppe Alonzo."


After making those observations, Bañuelos then spent 3 years evaluating five prickly pear varieties from Mexico, Brazil, and Chile for salt and boron tolerance in selenium-laden soils by collecting soils and sediments from the area and growing the varieties in field test plots at the research center in Parlier. He followed normal agronomic practices for the area and used a drip irrigation system that produced very little runoff. Results, published in Soil Use and Management, showed the prickly pear grew reasonably well in the poor quality soil with very little water. Unexpectedly, the plants also took up selenium, volatilizing some of it and keeping some in their fruit and leaf-like stems (cladodes). Other nonessential minerals were not found in higher concentrations in these plant parts.


Prickly pear was thought to be sensitive to high salinity. But the study results showed that tolerance to salt and boron depends on the genotype. The cactus variety from Chile had the highest tolerance and was the best at producing fruit and accumulating and volatilizing selenium. Many of the plants grown in test plots were smaller and produced less fruit than those in control plots, but some varieties actually grew better in the test plots. The results were promising enough for selected prickly pear varieties to be considered as a gentle bioremediation tool for soils loaded with selenium.

“We’ve found this plant needs minimal amounts of water, plus it can survive in these saline and boron soils laced with selenium,” Bañuelos says.—By Dennis O'Brien  Agricultural Research Service Information Staff. Notice in the photo the almost absence of large long spines in this domesticated variety as opposed to wild native species. Once there were very large Prickly Pear Farms in Lakeside California where I grew up. 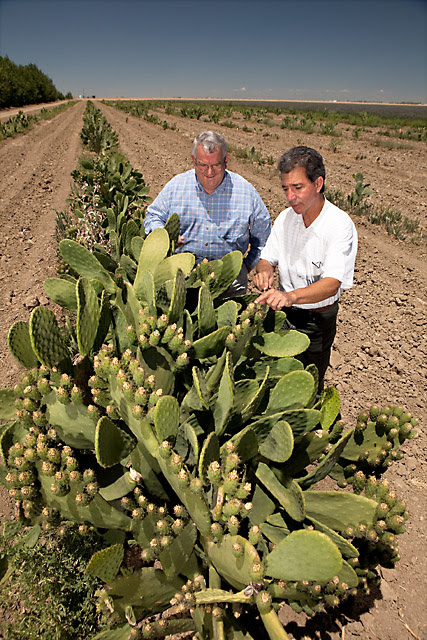 Here's a quick look at Lakeside California's Cactus Farming history back in the early and middle 20th century. Here is a link to the Lakeside Historical Society pages on Bernardo & Marie Maniscalco