Survival of the Mutually Cooperative

The headline here in Sweden from the pages of the University of Gothenburg read like this:

"Forestry and nature conservation can benefit from promoting more different varieties of trees, according to a new study in which researchers from the University of Gothenburg, Sweden, were involved."

"Modern forestry is based largely on monocultures – usually  pine or spruce trees in Sweden – mainly because this is seen  to be more rational. However, a forest also contributes  ecosystem services other than just wood production, such  as biological diversity, carbon sequestration and berries."

"A new study by the Swedish University of Agricultural Sciences (SLU) and Future Forests shows that – in comparison to monocultures – mixed forest provides beneficial effects for a number of different services, including tree growth. Thestudy was led by Lars Gamfeldt from the University of Gothenburg."

“It has often been suggested that a high diversity of tree species has a positive impact on ecosystem processes,” says Lars. “But until now, this relationship has mainly only been analysed for one process or ecosystem service at a time.”

"The study, which was carried out by an international team of researchers, is based on data from the Swedish National Forest Inventory and the Swedish Forest Soil Inventory. By examining the importance of the presence of various tree species in relation to six different ecosystem services (tree growth, carbon sequestration, berry production, food for wildlife, the presence of dead wood and biological diversity in ground vegetation), the study was able to show that all six of these services had a positive relationship to the number of tree species."

"For example, the biomass of spruce is linked to high tree growth and the biomass of pine to berry production, while higher levels of carbon sequestration occur in areas with a larger amount of birch. In order to increase all these services, forestry may therefore need to make use of more varieties of trees. Other studies of forests in central Europe, the Mediterranean region and Canada back up these results."

"The study also investigated the relationship between the individual ecosystem services. For example, high levels of tree growth appear to have a negative correlation with the production of both berries and food for wildlife, and with the presence of dead wood. On the other hand, there was a positive correlation between food for wildlife and both berry production and biological diversity in the ground vegetation."


“It’s not just a simple case of always getting more of everything,” explains Umeå University’s Jon Moen, “Sometimes you have to strike a balance between different ecosystem services.”

"The new study has been published in the scientific journal Nature Communications, and goes against accepted thinking within Swedish forestry to some extent. “Our findings show that both forestry and nature conservation could benefit from promoting more different varieties of trees, thereby providing a greater diversity of ecosystem services,” concludes Jan Bengtsson from SLU.

This also comes along with another release of similar News Reports on information about how plants actually help each other during periods of stress as opposed to competing in some Survival of the Fittest game. Brown University on January 20,2013 had this on their website as a headline. Decades of studies support and confirmed the "Strees Gradient Hypothesis"

Abstract:
"The Stress Gradient Hypothesis holds that as stress increases in an ecosystem, mutually supportive interactions become more significant and negative interactions, such as competition, become less so. The idea has been hotly debated but is now backed by a review of hundreds of studies co-authored in Ecology Lettersby Mark Bertness, professor of biology at Brown, who first formally proposed the hypothesis in 1994. The time has come, he said, to test its application and predictive value."

"In isolation, seaweeds and barnacles could never survive the heat stress above the tides, but they can persist in groups. Organisms under stress - even competitors - are better off together than apart." 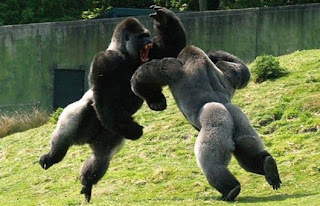 The entire article is fantastic in showing that the mutual cooperation that actually exists is truly the rule as opposed to the exception. This concept of "Survival of the Fittest" has hindered our understanding of the natural world more than it ever helped. The photo to the right is an example of how nature is often portrayed on the many science entertainment channels cloaked under the guise of Science like the History, Nature, National Geographic, Discovery and other channels. I've never seen so many shows now springing up where there appears to be dozens and dozens of individuals whose celebrity ambitions are to be the next big Crocodile Hunter wannabe. People should understand how numerous the filming takes are on those shows to pull off the desired defense reaction by the animal. Having the opportunity to narrate some short 15 minute documentaries and the 3 hours of separate takes to get it right, I can only imagine the countless intimidation and tormenting techniques used by the camera guys and their assistants to create the desired angry reaction from a poisonous viper or some other animal that has to be teased into that perfect strike. You know, when you have nature presented in such a way, the average person is not going to go out and show respect for taking care of Nature. Oh yes, the shows are entertaining like most of the Hollywood violent entertainment dishes out, but it's not truly reflective on how Nature really operates, as these recent research articles lays bare. Okay, when it comes to "Survival of the Fittest", I get it. I mean the fittest Sequoia Redwood seeds will do better than those from a sickly Sequoia Redwood tree. I think everybody else gets that too. But both these articles remind me of something I've posted before and bares repeating again. This was the short documentary film by Professor Suzanne Simard and her research on Mother Trees of the forest.

"These plants are not individuals in the sense that Darwin thought they were individuals competing for survival of the fittest. In fact they are interacting with each other trying to help each other survive." Professor Suzanne Simard


Well, let's getting back to Sweden. While I find this positive, there are also some major negatives going on here as well with regards their Government's blessing of Industrial Forestry Programs with regard to the paper pulp technologies. I'm referring to a Genetic Engineering company giant here called SweTree . The restructuring of a tree's genetics makeup to produce less lignin for the paper pulp industry. This lignin is what makes the tree's wood strong to hold up against the storm elements. But this GMO weaker tree has gotten out into the wild. This has dire consequences for healthy forest for which a great biodiverse wildlife community depend on. The problem for land owners here is they need to have harvests of these trees every 25 years, not every 100+ years. Hence the trees have also been engineered to grow much faster and aided with the help of synthetic chemical fertilizers dropped from the sky by Helicopters or on the ground by Tractors pulling spreaders dispensing this fertilizer, they have created a bizarre unnatural situation. I never in my life thought that mankind would ever be feeding forests chemicals from the air over millions of hectares of land.

Speaking with many local residents recently, they have tell me it was never common for trees to fall down in any normal storm, even stronger storms. Engineering a tree to grow extremely rapid with less lignin has also created a weaker root system. The insistence by the Corporate researchers that they have engineered the trees to NOT produce pollen is hollow, as one of their favourite trees for this purpose are Aspen. Anyone know how else an Aspen from the Populus family replicates itself  other than seed ? Even the cheap pine wood that is sold in stores here for grilling food in summer fires up and burns like paper because there is nothing to it. It is very light weight and there is hardly any density to it. But hey, this is what many Swedes themselves are telling me. So as not to ruin the positive information presented here, I'll let you reflect on what can be learned and gleaned from the info and how you personally can make practical application in your own personal garden or urban landscape. Who knows, maybe even your own habitat restoration project. I really love both of these research papers. Everyone should keep in mind that every vegetative type of ecosystem operates in the same manner even though there may be differing variables. Both of these studied systems were in the northern hemisphere, but Deserts, Savannas, Oak Woodlands, Chaparral Plant Communities and even Tropical Rainforests are run by the same rules and directions within their own adapted specific parameters. The fact that many corporate entities disrespect much of this may certainly cause a break down in these mechanisms in our future.  But, I'll have a Swe-Tree article later.

BTW, there was a film documentary on Geneticist David Suzuki's website called "The Nature of Things" which I was not able to watch because of International restrictions as far as the video goes. But it aired earlier in 2012. The film or documentary is called  Smarty Plants: Uncovering the Secret World of Plant Behaviour  and I'm curious if anyone in North America saw this film ?  If you did, do you know if there is a way around viewing it with a safe proxy ? I was hoping some unscrupulous copyright infringing *cough-cough* "Good Samaritan"  would have copied it to a YouTube account by now. Oh well! There is a short clip on that link and an article as well. Here is another link to this subject:

Posted by Chaparral Earth at 3:46 AM