I've previously written a couple of posts on the subject of Locusts and I never seem to find areas where I am satisfied with knowing everything about them. This past Spring April/May when I last visited Southern California, I ran across some old plant friends of mine again. I went back to Anza and revisited my old New Mexico Locust woodland patch. Still thriving and in full bloom at the time. You could say this is a follow up to what I've written previously here about networking with New Mexico Locust which I'll post the link at the bottom of this post.

The lady who now owns it is quite a collector  of things. She runs an antique barn down in  Anza. But the New Mexico Locusts which  really don't get much higher than what you  see in the picture

This is a Black Locust (Robinia pseudoacacia) and it's location is on Hwy 79 north from Santa Ysabel CA and right directly across the street from the south entrance to Santa Ysabel Indian Reservation on School House  Rd. This medium sized tree has been here for ages and  was an early Landscape plant in many rural area gardens  and properties of San Diego County. On the opposite  side are some younger trees which may have germinated by seed or by underground root networks. Incredibly though, this small tree just seems like it's been here forever. Well, as far back as my memory will take me. Of course when we were all kids in the early 1960s and took drives into the San Diego backcountry I would see them everywhere. I assumed of course that they were native to the wild here. But that was not the case. One of the reasons I thought them to be native was/is there incredible ability to survive and thrive under hot and otherwise harsh conditions. In many way they are very similar to Engelmann Oak which is native and a tough survivor. At the very least in some areas, you could label them as naturalized. But not so much as a negative like an overwhelming invasive such as Tamarisk or Brazilian Pepper Tree.

I took the above pictures on my early visit into the backcountry, but below are some pictures of an area I always admired for a long row of Black Locust at the foot of a hill along Hwy 67 just north of Poway Road Jct. It is just south of an old Antique & Curio shop which burned down during the 2003 Cedar Fire and south of Mount Woodson. It's also across from an outdoor parking for hiking in an open space area directly across Hwy 67 called Iron Mountain Trail that you see above here. When I was a kid and we past by this area on weekend drives, I always thought these were some variety of Native tree. They were never watered that I knew of and this area is a hot dry harsh by garden standards climate spot. Yet they always thrived here But the Cedar Fire put a stop to that temporarily, like every other plant in it's pathway. What I was curious about how ever is what has caused the explosion of growth of far more trees than historically existing prior to fire ? Actually it is the fire ecology that was responsible for spread by underground sprout re-vegetation by extensive root networks, than by any seed dispersal spreading. And it makes more sense. I found a page from the Michigan Department of Natural Resources which considers it an invasive there. First a bit of history regarding this tree, it's origins, and native habitat.


Black locust is native to the southern Appalachians and the  Ozarks, where it occurs on slopes and forest edges. It has  been planted in 48 states and was noted as spreading in  jack pine barrens in Michigan as early as 1888. It tolerates a  wide range of soil conditions, and spreads clonally as well as  by seed. Its dense thickets shade out native vegetation. As a legume, black locust fixes nitrogen and soil nitrogen  levels are higher under old trees. It produces more leaf litter  and that litter has much higher nitrogen concentrations  than most native tree species. Soils under black locust also  have elevated levels of phosphorus and calcium.

Black locust is a deciduous, medium-sized tree ranging in  height from 12-25 m (40-82 ft) and 30-60 cm (12-24 in) in  diameter, although trees in Michigan have reached 1.5 m (5  ft) in diameter. It has a narrow crown and an open, irregular  form with contorted branches. Black locust has an extensive  network of lateral roots and forms dense clones.

Black locust reproduction is primarily vegetative, although  it can also reproduce by seed. It sprouts from the roots and  forms clones, particularly in sandy soils. It also sprouts easily  from stumps in response to damage.  Black locust grows rapidly and matures early; some trees  may produce seed at six years of age. Heavy seed crops occur at one or two year intervals.  The seeds have a hard, impermeable coat and require scarification to germinate. They are heavy and fall close to the  parent tree, although birds may move them over longer distances. Michigan Flora notes that seeds may remain viable in  the ground for up to 88 years. Seeds can accumulate in the  soil a density of 29,817 seeds/acre in second-growth mixed  forest. Densities are much lower in mature forest. Trees begin suckering at four or five years of age. A fibrous  network of roots connects a black locust grove, with the  oldest trees in the center and younger trees around the  periphery, In late-successional communities, black locust  becomes rare, as the species is shade-intolerant.

"THE ROLE OF BLACK LOCUST (ROBINIA PSEUDOACACIA} IN FOREST SUCCESSION"

Within the early successional watershed, black locust sites had net mineralisation and nitrification rates at least twice as high as those in the pine mixed-hardwood stands. Concentrations of exchangeable nitrate in the soil of black locust stands were higher than in pine-mixed hardwoods at 0–15 cm in March and they were also higher at 0–15, 16–30 and 31–45 cm depth in the black locust dominated sites in July. Soil solution nitrate concentrations were higher under black locust than under pine-mixed hardwoods. Areas dominated by the nitrogen fixing black locust had greater nitrogen mineralisation and nitrification rates, resulting in higher potential for leaching losses of nitrate from the soil column in the early successional watershed."

So there are pros and cons to this beautiful tree. So what's new, most of the cons are a result of human ignorance and even stupidity. The tree has potential just as any other living thing on this planet. Depending on it's location around the globe it could enhance or becoming an uncontrollable overwhelming invasive. Please take a look below at some pictures of the trees along Hwy 67 that most motorists never give a second glance at. It's a pity really. They've truly beautified this location along Hwy 67 since the early 1960s. Back then I remember viewing them along Hwy 67 just past Poway road heading further east towards Ramona when we took weekend family drives to Julian and seeing these 15 or so single large trees. But that all change dramatically after the 2003 Cedar Fire which seemingly destroyed everything. I say seemingly because appearances above ground were deceiving. It was what was happening underground that made the incredible difference which was never evident for decades until tragedy struck. 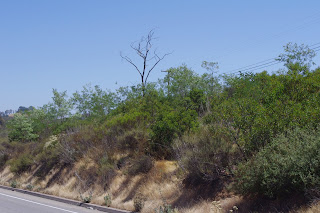 The above photos show far far more young Black Locust trees, than were originally present before the fire. Rather than seed [which could also be a very real possibility], these trees most likely regenerated by vegetative sprouting from their extensive root system network infrastructure. The consequence of the 2003 Cedar Fire is now there are 10 times as many Black Locust trees [most likely clones] as previously present before the fire. Now mind you, you'll have to look closely as these little Locusts which are woven in among the Laurel Sumac, but they are everywhere far up the hill and grow right down to Hwy 67. What an incredible come back.

Below is an aerial photograph just after the 2003 Cedar fire which consumed this entire area. The Antique shop of course is obliterated and the hill where these masses of Black Locust trees are located is on the very far right where the Hay 67 ends at the photo to the right. You can also see the Iron Mountain Trail parking area across the street. Mount Woodson is over on the left, but out of the picture. They Hwy 67 on the left running towards Ramona at this point travels through some of the most beautiful old growth Oak Tree Chaparral mosaic you'll ever find and if Fire never hit this area EVER, it would still be healthy and perfect as it is.
Just some closing thoughts. While the paper from Michigan was a bit negative on them as a take over invasive, I have never noticed this problem here. Mostly because I think the drier climate keeps them in check. Only this fire option has created a spread, so maybe that could be a game changer. You should know that as a tree choice, when they flower and develop those characteristic white flower clusters which look more like white Wisteria blooms, the fragrance is powerful at night and smells of Orange blossoms. My first experience with this was at Cahuilla Market. I asked the then owner, Chuck Mckee if he had orange trees up around his place and he said no it was the Locust trees. My old New Mexico Locusts in Anza I find to be far more aggressive when it comes to underground spreading and cloning even far away from the parent tree. I planted only one and there are presently about 5 or 6 main trees left with a couple of sprouts in the Redshank. While I lived there and during wetter times, there were spreading prolifically everywhere. So clearly the drier climate keeps even them in check. Amazingly however, they never have shown signs of any drought stress as far as I could tell. Especially since they are never irrigated. Their nitrogen fixing and networking abilities are well known and their ability to help Ponderosa Pine regeneration in New Mexico is well documented. It's all about knowing your native plants and being aware of their requirements and limitations and how practical landscape design and maintenance can prevent any future problems.


Posted by Chaparral Earth at 9:06 AM