It's not only good business model, but a great insurance policy as well

This is not going to be the usual save the Honey Bees story, although I love honey bees. But the problem is so much attention is given to the semi-domestic critter of Euro variety fame, that almost no attention of wild bees comes down line to the average person. I'm talking all manner of wild bees and beneficial parasitic wasps. While all bees will suck nectar, countless varieties are also parasitic and even carnivorous. What is amazing and exciting is that more and more farmers and small groups on their own are taking this to heart. Never expect any help from industrial agriculture which has no interest in ruining their business model. I actually started this post as a draft last May 2014, but you may wish to read the article on your own from the link below:

Recently I stumbled upon a slideshow presentation from the, Xerces Society, which was set up by Wildlife Biologist Marcus Miller, who actually put on a beautiful presentation of photos with brief footnote comments which illustrated  various beneficial insects and exactly what they can do for your garden, landscape or farm. There are even slides of some Central Valley California Farmers planting rows of native flowering California Chaparral to facilitate this purpose of attracting beneficial insects further, but I'll reference it in another post. This Conservation Bio-Control presentation was again, created by Wildlife Biologist Marcus Miller, which referenced many types of beneficial insects for pest control as opposed to the conventional pest management control recommended and controlled by this world's Corporate Industrial Agriculture business interests. Sustainable management tips are given on Colorado Potato Beetle and European Corn Borer and many others are presented in this wonderful slide presentation. Presently, there are many small Farm operation Vineyards like the above photo, who are taking up the natural approach to pest control. Without me commenting very much, I'll let the slides do the work, with only a few comment interludes. 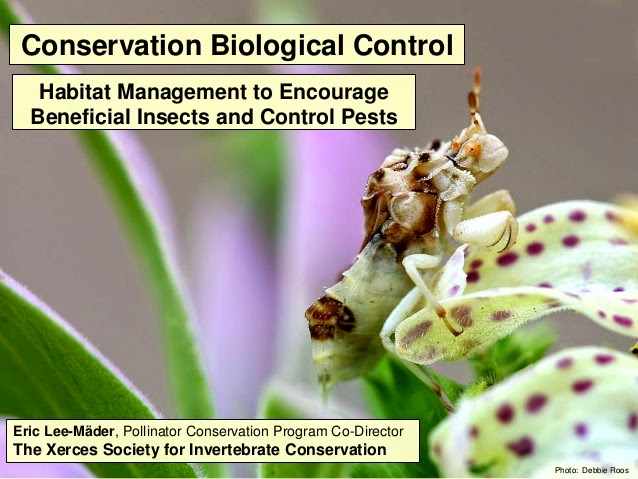 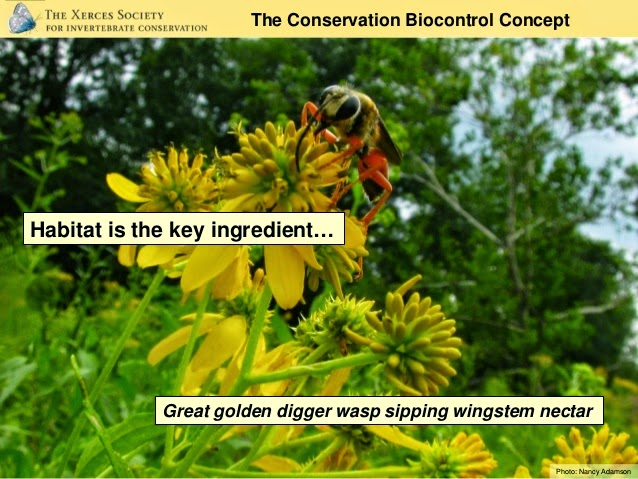 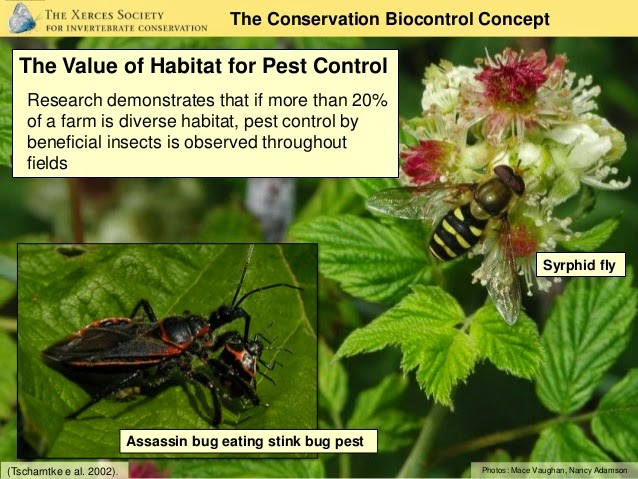 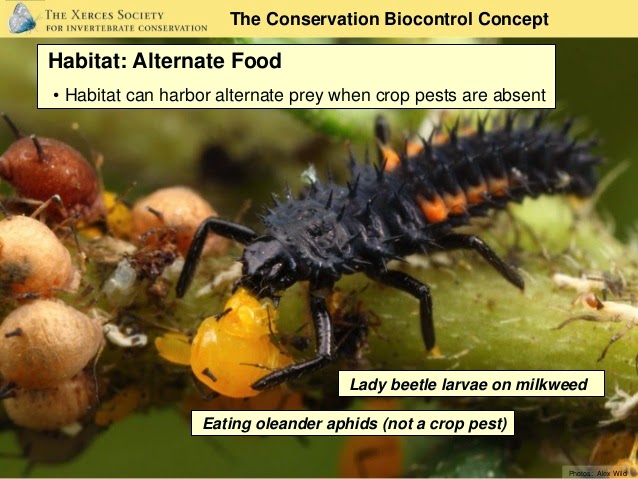 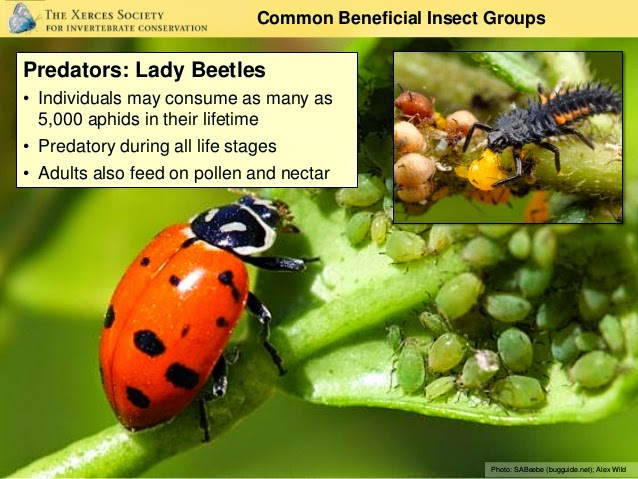 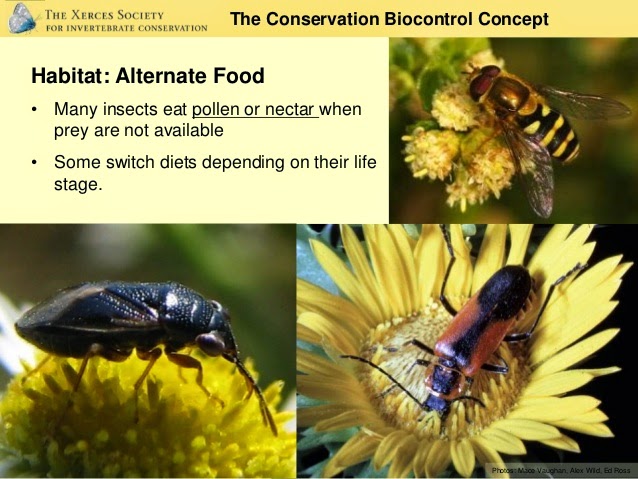 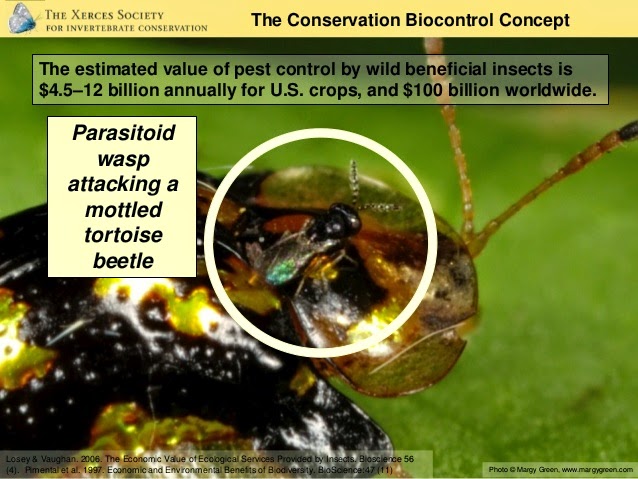 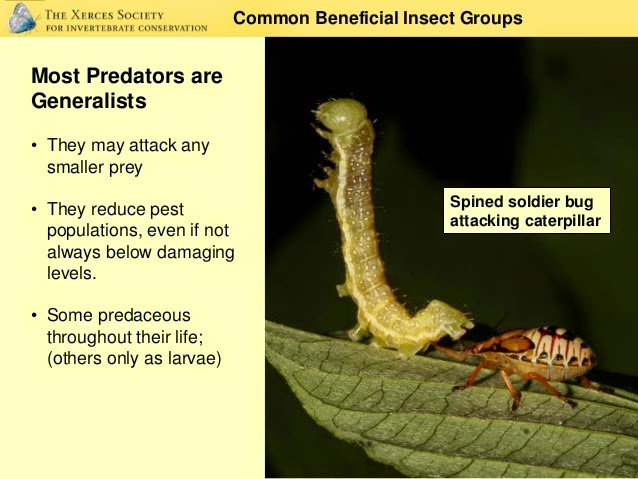 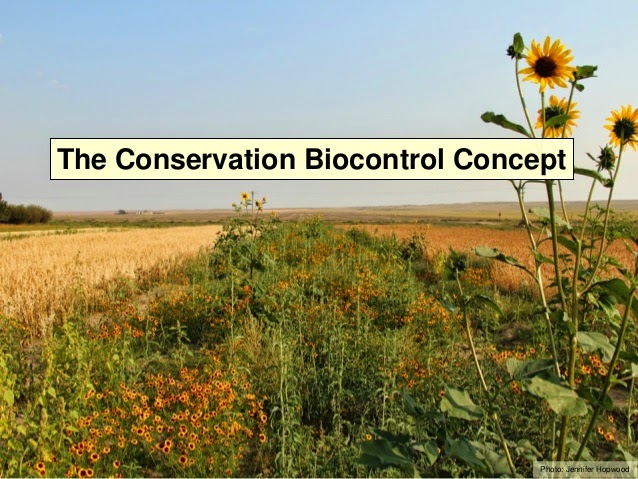 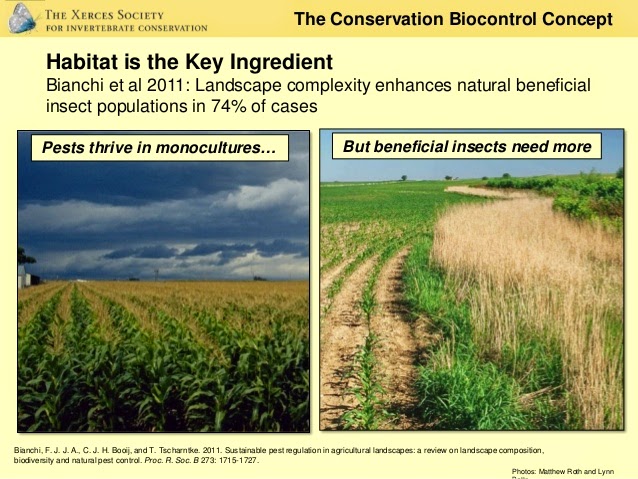 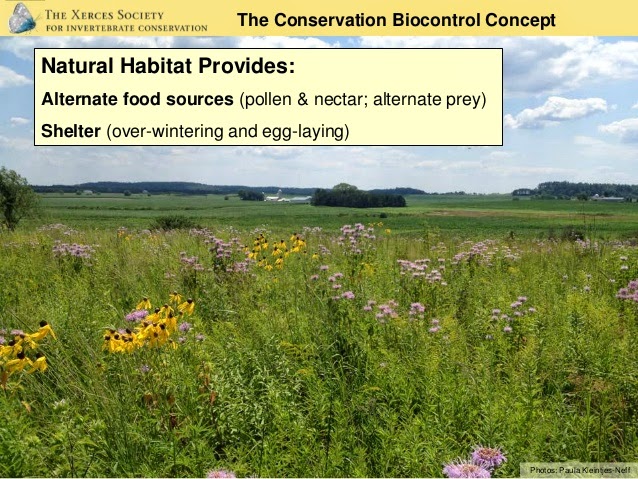 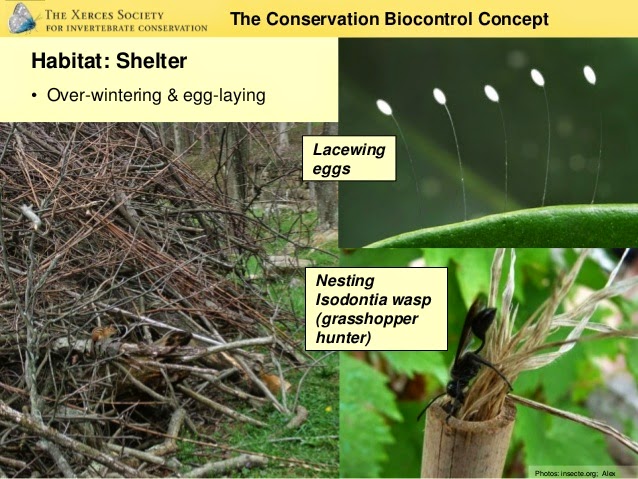 When you look back at many of the things you were taught in school from government approved textbooks on how they believed the way our natural world worked according to the then known Science, we are at a point now where people are realizing that Science wasn't always right after all. So you begin to question and become suspicious of blanket statements about this thing called "Scientific Certainty" as it's presented to us by the Corporate Industrial Science folks. The sad state and poor health of our planet Earth's natural world is a testament as to how scientific consensus has actually been more wrong than right. It's easy for the science type defenders to view such material as presented by Marcus Miller above and say, "Well see, Science is self-correcting". Except when it's not and then is glaringly wrong. The biggest problem has been not Science being used as a tool, but the people who have appointed themselves as being in charge of just how one goes about using that tool. The Industrial Science continually alleges only they have consensus in science, because it's been their prime way of bullying the people [the general public] into believing many things which are not true. Originally, wasn't the whole point of science that we have to question consensus, especially when we see it going in the wrong direction ? We all should have the freedom to debate on how to interpret evidence. But the question is, what exactly is real evidence, especially since both sides claim to have 'The' evidence ?

"The available body of facts or information indicating whether a belief or proposition is true or valid . . "

All sides have what they view and claim as the evidence to back their version of what is the truth, but it's that interpretation & challenging of the said evidence that put's one at odds with the consensus as established by the prevailing ruling orthodoxy within Science. In the case of how to Farm, Landscape and Garden, Industrial Science claims all knowledge must come through them because only they have 10s of 1000s of peer-reviewed papers and the scientific consensus is on their side as a result. So they argue from authority and citation bluff their way into the pursuit of wealth. But how can the average person tell which evidence is truly relevant ? In a Court of Law the rules for relevant evidence are defined as anything that has a

You should also note however that for evidence to be evidence it need not compel a conclusion; it need only have a tendency to lead to the conclusion. Now I didn't really want to bring this up again, but take the GMO debate in December of 2014 at "Intelligence Squared" as a court room example of sorts. In the end if we are to believe the results of the audience polling, we could conclude that Team Organic had no evidence to make their case. At least this is what you read from readers all over the Internet who made this claim. Hence in most discussions after that debate, defenders of GMOs insisted that Team Organic lost because they had no evidence. That would be an ignorant conclusion. Of course there was evidence. It was a matter of not properly interpreting that evidence and showing the audience where it was relevant. However, the evidence they presented and the way they presented it just did not persuade the audience whom we could liken to a Jury in a court of law. In actual fact, I personally know that they did not use ALL of the evidence that was at their disposal, as I previously pointed out in another post. Their case was not professionally prepared which was irresponsible on their part. If this had been a real legal case, any defendant who lost as a result of poor judgement on the part of their lawyers, would have easily been allowed an appeal if that debate were a real court trail. That's why they lost, not because the Team Monsanto had better evidence. They didn't. They bluffed and definition shell gamed their way around the evidence which they twisted masterfully. It is however unfortunate that we and nature all have to be paying the high price for flawed evidence which allows the prevailing orthodoxy to control the world's food supply. Nothing under the present system will change that. However, there are several things people can do personally as individuals as to their own urban landscape or gardening project, or even small farm. I'll post some of those ideas from Marcus Miller again in my next post (PART II) from the link below here:

No GMOs and no pesticides: Vietnamese farmers use flowers to protect rice